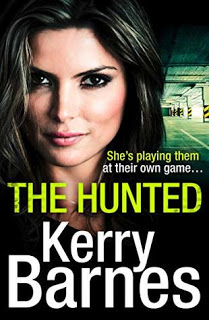 Having spent her life watching her father run his East London firm, Zara Ezra has learnt a thing or two about being a gangster, and she’s ready to take over when the time comes.Mike Regan, a blast from Zara’s past, is the head of his own firm, but when his son is kidnapped in the middle of a gangland feud, Mike has no choice but to accept help from the Ezras to get his little boy back alive.With a rival firm playing increasingly dirty, murder moves to the top of the agenda and Zara has some big choices to make. It seems that the only way to come out on top is to play them at their own game…But will she become The Hunter or The Hunted?

Kerry Barnes is soaring on wings like that of an eagle, reaching dizzying heights and fast becoming a highly esteemed, modern gangland mistress of our time!

A shot of adrenaline to the imagination and a hard-hitting compelling read, be prepared to be swept along at this fast-paced powerful family drama.

Boldly told, rich with menace and grit it will leave the hairs standing up at the back of your neck!

One particular scene in the book played out so vividly in my mind’s eye, it was an absolute mind-bending experience, for a moment I actually thought I was the protagonist herself and going through every motion she went through, my senses kicked right in like a film being played in my head I literally fell to my knees shouting NOOOOOOOOOO!!!!!! OMG ‘No Way’ No Way’ is this happening that I ended up checking my own bodily self to make sure it wasn’t me it was happening to!
That’s how engrossed and caught up in the moment I was!

Even though the book is full of grit, profanity, and violence Kerry put’s heart right back into the book, by the ending it becomes sensitive and poignant BUT we know there is more to follow –

A battle rages on and revenge to take!

The question is will YOU be there to experience it?

I know I will!

I have The Rules already on my wishlist and I don’t want to miss out! (