Skip to content
I am super excited to share my 5 star review for Truth and Lies by Caroline Mitchell with you today on Blog Tour…..Which is out now

Meet Amy Winter: Detective Inspector, daughter of a serial killer.
DI Amy Winter is hoping to follow in the footsteps of her highly respected police officer father. But when a letter arrives from the prison cell of Lillian Grimes, one half of a notorious husband-and-wife serial-killer team, it contains a revelation that will tear her life apart.
Responsible for a string of heinous killings decades ago, Lillian is pure evil. A psychopathic murderer. And Amy’s biological mother. Now, she is ready to reveal the location of three of her victims—but only if Amy plays along with her twisted game.
While her fellow detectives frantically search for a young girl taken from her mother’s doorstep, Amy must confront her own dark past. Haunted by blurred memories of a sister who sacrificed herself to save her, Amy faces a race against time to uncover the missing bodies.
But what if, from behind bars, Grimes has been pulling the strings even tighter than Amy thought? And can she overcome her demons to prevent another murder?

OH MY GIDDY AUNT….Caroline Mitchell what are you doing to me! I am a massive fan of Caroline and just when I thought her books couldn’t get any better along came DI Amy Winter daughter of a serial killer. If that tag line doesn’t sell it to you I don’t know what will. You guys are in for one hell of a treat.The author has totally nailed it yet again. I cannot begin to tell you how much I LOVE this book.

Right from the word go I knew this story was going to amazing which starts off with a bang. I found myself totally hooked and couldn’t put it down until I had devoured it. The Story starts of with a newspaper report BOOM what a start. The more I read the more I wanted to know.

I have to say it isn’t very often I have read the first book in a detective series and think WOW that was so good I wonder what the next instalment will bring. Carol has made no room for improvement and has pulled out all the punches with this nail biting, gritty read.

Impressed is an understatement…this is one of those books that I want everyone to read. In fact it is the best Crime Thriller I have read this year.

In case you hadn’t guessed I bloody love Amy Winter she is a very unique character being the daughter of a serial killer. You cannot help but like her. She is a strong determined character It doesn’t take the reader long to find out about her twisted mother weaving a story where we learn about her background which is woven with the plot. This is a well crafted story….. OMG I am hyperventilating just thinking about it. And now I am left wanting more.

This is crime at it’s very best, extremely well written,which will totally take your breath away.  Which I highly recommend giving it all the freaking stars. 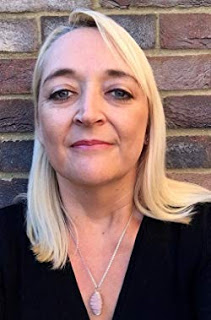 USA Today and International #1 Bestselling Author. Shortlisted by the International Thriller Awards for best ebook 2017.
Over half a million books sold.

Caroline originates from Ireland and now lives with her family in a village on the coast of Essex. A former police detective, she has worked in CID and specialised in roles dealing with vulnerable victims, high-risk victims of domestic abuse, and serious sexual offences. She now writes full time.

Caroline writes psychological and crime thrillers. The most recent, Silent Victim reached No.1 in the Amazon charts in the UK, USA and Australia. It has been described as ‘brilliantly gripping and deliciously creepy’.


Sign up to join her Reader’s club for access to news, updates and exclusive competitions and giveaways. http://eepurl.com/IxsTj