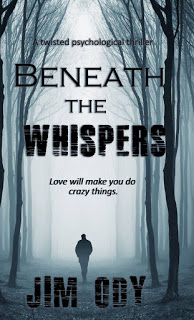 Genevieve Deboise is too good for Scott Dean. He’s always known that. It isn’t a shock to learn she is cheating on him.
What is a surprise is bumping into his childhood sweetheart in the woods where he’d planned to take solace in his heartbreak and bruised ego.

But running into Mary-Ann Jennings isn’t exactly the fairy tale it might seem.
Instead, his first love needs his help finding a USB stick that has fallen into the wrong hands. Now in the cellar of Genevieve’s new lover, Scotty must confront his feelings for both women in order to retrieve the missing USB stick.
On a quest to confront his past and locate Mary-Ann’s property, he journeys through the whispers that have always surrounded him.

Love will make you do crazy things.
But is it enough to get beneath the whispers?

Beneath the whispers is another totally different story by Jim Ody. I would love to know where he gets his ideas from. If you haven’t read anything by this is author then now is a good time to start with this being a Novella so it is a quick and easy read.
Told from Scott’s  POV we follow his story about his break up with his girlfriend. Meeting a handful of characters along the way like Freddie…what a character he is. You will know what I mean when you read it yourself. and Mary- Ann his childhood sweetheart who he bumps into and she asks for his help finding a USB stick that has fallen into the wrong hands. On a quest to confront his past he journeys through the whispers that have always surrounded him.
Although this is a novella after reading it you will surprised by how much happens this story. There is plenty of character development so you get to them well. It is full of mystery and suspense. With some added humor. I couldn’t wait to finish it to find out what was going to happen!
If your looking for a short and snappy read then this is the book for you, which I highly recommend giving it 4 stars. 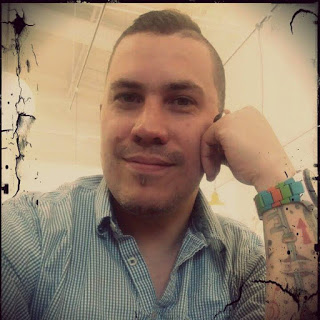 Author Bio
Jim was first published in an English School Textbook in 1987. He won a competition to draw a dog-walking machine. Having won an art competition the year before, he felt that at the age of eleven he had peaked and consequently retired from the world of art. For 10 years Jim wrote for a number of websites reviewing and interviewing bands in his own unique way, as well as contributing dark poems and comedic features. He writes dark psychological/thrillers that have endings that you won’t see coming, and favours stories packed with wit. He has written three novels released through Zombie Cupcake Press and has also contributed to several anthologies. Coming soon is his psychological/mystery ‘Beneath The Whispers’ released by Crazy Ink. He also has short stories appearing in the following anthologies ‘War Paint’, ‘Crazy Fools’, ‘AWOL A.I.’ and ‘The End?’. Jim has a very strange sense of humour and is often considered a little odd. When not writing he will be found playing the drums, watching football and eating chocolate. He lives with his long-suffering wife and three beautiful children in Swindon, Wiltshire. 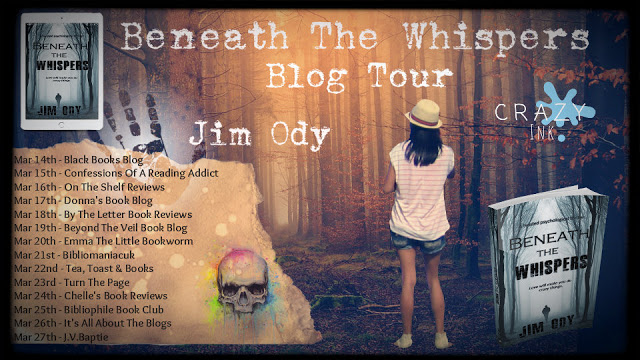