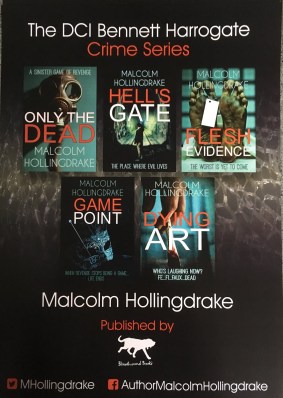 Can you describe your character?

It will not be a surprise to those who have read the series but I can only describe DCI Cyril Bennett as somewhat of an enigma. Over five books we have discovered more about the man. We know he has an eye for detail, he’s impeccably dressed and although his nickname is Flash this was not given for that reason.
He has an inability to commit to long-standing, personal relationships. We do now, however, see him in a relationship with Dr Julie Pritchett that does seem to grow stronger with every book, and yet he seems happy in his own skin. One thing we do know is that he is a stickler for good manners and considerate to others.
Bennett has a passion for Northern School art and has been an avid buyer and seller of works. He loves the uncertainty of auctions and many hours of his spare time will be spent searching out a specific artist. Within each book there will be references to one or more artists.
Does he have a weakness? Probably many… we are aware of his travel sickness and a love of Black Sheep ale although the latter is never linked with the former I’ve heard him protest!

What is his job role and where does he work?

Detective Chief Inspector Bennett works for the North Yorkshire Police based in Harrogate alongside DS David Owen. He specialises within the Major Investigation Team but owing to his experience he can find his role flexible, demanding and varied. Part of the work will include cold case investigation.

Where did the original idea of Cyril come about?

I’d written a thriller and self-published on Amazon. I was looking to begin a new work and wanted to try a police procedural. On hearing that Harrogate was one of the happiest places in the United Kingdom to live, I thought I’d add some crime and so the Bennett series was set there. I also knew Harrogate well after living in both Bradford and Ripon. When researching the first novel I discovered this Satanic verse written in 1905. It inspired the darker side to the crimes within the series, particularly, ‘Hell’s Gate’ which was originally titled ‘Just Above Hades’.

As Satan was flying over Harrogate Well,
His senses were charmed with the heat and the smell,
Say he “I don’t know in what region I roam
But I guess from the smell I’m not far from home.

Within every society there’s a dark side, a shadowy area. Crime and sinister deeds are what the darkness was made for.

What makes them original?

Neither is alcoholic!
Cyril has a sharp wit, both have a sense of humour and each seems to lead a normal life and yet there’s something missing from each character. If you take Cyril, we do not know much of his background; Bennett is a man of many secrets, he has a past that he refuses to revisit. He’s a man happy in the present. Part of the pleasure of writing a series is being able to slowly reveal more of the characters’ traits and how the past has moulded the present. The skill is trying only to drip-feed just enough within each novel. Book six out in January sheds more light on a greater part of Cyril’s past than in any other book. At times it was difficult to write. A part of the author inevitably leaches into the ink.
What has been interesting to me is how readers identify with either Bennett or Owen. David Owen certainly has his followers and maybe some time in the future I might write a book purely featuring him if he manages to rise to the rank of Inspector!

What makes him tick?

A passion for justice, professionalism bordering on obsession, comradeship, loyalty and perfection in all things.

What is his biggest fear?

Commitment to relationships with the opposite sex, travelling at speed in a car with Owen… it only usually ends one way!

If you and your character met in real life, do you think you’d get on?

Famously – there’s a lot of me in Bennett. However, if I had to choose between Bennett and Owen with whom to share a beer, then it would have to be the big man, Owen.

Who would you like to see play them if your books were made into a film or TV show?

I’d choose Tom Hollander for Cyril Bennett. Somehow he seems to meet my mental picture of the main character. I’ve never really been able to allocate Owen’s role to an actor, maybe the readers have their own views on this. However, Nicholas Camm has narrated the first two Bennett books for audiobook and he’s done a brilliant job. He would fill the role well.

How many books do you have in the series so far?

There are five published novels: ‘Only the Dead’, ‘Hell’s Gate’, ‘Flesh Evidence’, ‘Game Point’ and ‘Dying Art’. Two have now been made into audiobooks with the others scheduled to be produced. Book six in the series, ‘Crossed Out’ will be published on January 28th.

What’s in store for them next?

Another complex crime case is being planned at present. A friend of mine wanted to chat about his idea of a perfect murder. He’s worked within a certain industry for years and we talked for a couple of hours. The seeds of an idea have now been planted and I have begun research on book 7.
The series will continue to be produced as audiobooks and, if Bloodhound like what I do, then maybe there will be an extension to my seven book contract. Whatever happens, creating and writing the Bennett series has been a dream come true and I’d like to thank everyone who has helped me along the

About the Author
You could say that the writing was clearly written on the wall for anyone born in a library that they might aspire to be an author but to get to that point Malcolm Hollingdrake has travelled a circuitous route. 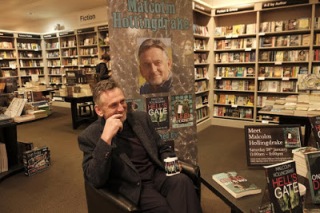 Malcolm worked in education for many years, even teaching for a period in Cairo before he started writing, a challenge he had longed to tackle for more years than he cares to remember.

Malcolm has written a number of successful short stories and has four books now available. Presently he is concentrating on a series of crime novels set in Harrogate, North Yorkshire.

Born in Bradford and spending three years in Ripon, Malcolm has never lost his love for his home county, a passion that is reflected in the settings for all three novels.

Malcolm has enjoyed many hobbies including collecting works by Northern artists; the art auctions offer a degree of excitement when both buying and certainly when selling. It’s a hobby he has bestowed on DCI Cyril Bennett, the main character in his latest novel.

I am thrilled to announce that I have just signed an extended publishing deal with Bloodhound Books for the Harrogate based DCI Cyril Bennett novels.