Skip to content
I am delighted to welcome Kirsten Mckenzie author of Painted to take part in my Q&A Interview. You can grab your copy for only 99p from Amazon right now

Good morning welcome to Chelle’s Book Reviews. Can you tell us a little about yourself and background?
I started out my adult life studying computer programming. After a year of that, I realised I didn’t want to sit in front of a computer for the rest of my life. So I dropped out and joined the New Zealand Customs Service. I was a Customs Officer for fourteen year, and it was an exceptionally varied job – fighting international crime, clean policing with no dead bodies, counterfeit clothing, fraud, drug investigations, client interaction. I loved my job. Then my father died unexpectedly, so my brother and I quit our jobs to run the family business – an antique shop. I adored working at the shop, imagining the stories the antiques could tell, the customer interaction, the thrill of discovering hidden treasure in a drawer or in a box.

When did you know that you wanted to become a writer? and how did you go about it?
When my second daughter was about to start school, my brother and husband both asked what I was going to do with my spare time, given that I only worked in the shop part time. I announced that I was going to write a book. My brother said that I would never finish it… so I set out to prove him wrong. Not only did I finish it, but I found a publisher in an extraordinarily short time.

Can you tell us what genre your books are and the audience you write for?
Ah, this is where it gets a little tricky. My first two books are historical time slip – Fifteen Postcards and The Last Letter. They are the first two books in the Old Curiosity Shop series. After I finished The Last Letter, I needed a break from the deep research I’d been doing for the series. I had a short story I’d written for a competition a few years earlier, which kept calling to me to turn it into a novel, so I did. Eight months later my first horror novel was born – Painted. Painted was released in June 2017.All three books were written for the adult market, but they are also suitable to the Young Adult market. I will never write anything with overtly adult themes, basically because of some of the things I saw during my time working for New Zealand Customs.
What is your writing process? and how long does it take?
Fifteen Postcards took eighteen months. The Last Letter took a year. Painted took eight months. I think I’m getting faster! Horror is much easier to write than historical fiction, because of the level of research required for good historical fiction. My next book is also a horror… I’ve snuck in another one before completing my series because I enjoyed writing Painted so much! Basically I sit down at my computer and start from the ‘Once upon a time’ position, and write chronologically until I type ‘The End’. I don’t plot. I am not that organised. And things in my life dictate how the story flows, and which characters step up to play.

Are your characters based on anyone you know or are they just fictional?
My friends know that I’ve used their first names or surnames for my characters. I used some habits from people I have known over the years to flesh out my characters – for example, one of the characters in The Last Letter rings his mother every lunchtime. I once had a supervisor who did this, every day. My desk was behind his so everyday I heard a version of the same script where only the details of the meals or shopping changed…

* Have you wrote about a personal experience in your novels?
Yes. I was once held up at gunpoint when I was working in our antique shop. I wove this into Fifteen Postcards, which was quite cathartic. And during a cruise up the Nile, I woke to find a man in my cabin. Fortunately nothing untoward happened, he was drunk, but the fear of waking up with a man standing over my bed was the inspiration behind Painted. You’ll have to read it to find out how I incorporated that into my novel!

What research do you do?
Google is my friend. And Twitter. I have been blessed by having so many people I can reach out to online to ask questions of. All three books are heavily influenced by my antique background, so I am constantly referring to antique reference books (physical old school type books) to ensure I describe the trim on a wardrobe, or the age of a sideboard, or the quality of an ornament. We’re usually only talking about three or four words in a sentence/paragraph, but the reader deserves to have that right. And I once sent a London based friend into a pub Charles Dickens drank at, so he could describe for me the wooden snugs I wanted to write about.

Who would you like to co-write with and why?
I’ve thought about it. I think a book could easily be written by two or more people, if each person took responsibility for one character. I’d love to write with my author friend Andrene Low – she’d bring a level of humour to the book which I would struggle to write.

What’s your favorite book?
The Five People You Meet In Heaven by Mitch Albom. 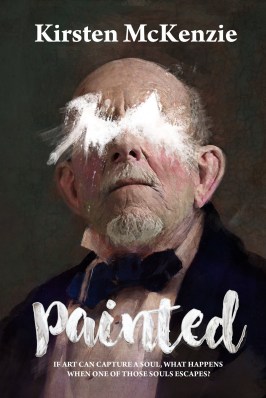 The Power of Love by Frankie Goes to Hollywood