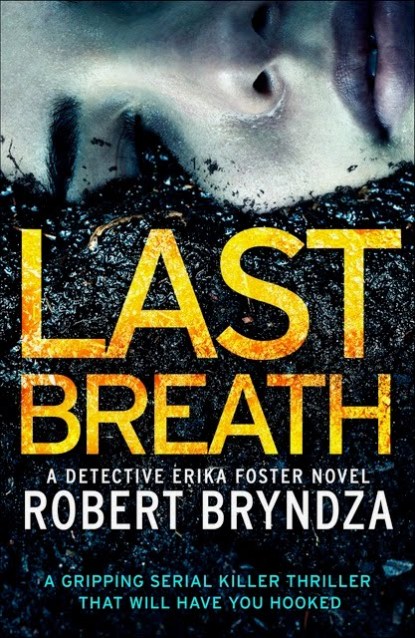 He’s your perfect date. You’re his next victim.

When the tortured body of a young woman is found in a dumpster, her eyes swollen shut and her clothes soaked with blood, Detective Erika Foster is one of the first at the crime scene. The trouble is, this time, it’s not her case.

While she fights to secure her place on the investigation team, Erika can’t help but get involved and quickly finds a link to the unsolved murder of a woman four months earlier. Dumped in a similar location, both women have identical wounds – a fatal incision to their femoral artery.

Stalking his victims online, the killer is preying on young pretty women using a fake identity. How will Erika catch a murderer who doesn’t seem to exist?

Then another girl is abducted while waiting for a date. Erika and her team must get to her before she becomes another dead victim, and, come face to face with a terrifyingly sadistic individual.

Gripping, tense and impossible to put down, Last Breath will have you on the edge of your seat, racing to the final dramatic page.

OMG,OMG,OMG Robert has smashed it once again! Just over a year ago I read The Girl In The Ice and I knew then that he was going to be a smash hit. I have loved every Erika Foster novel that Robert has wrote. Just when I think there is no way his books can get any better, Robert just proves me wrong.These books just go from strength to strength. I keep saying OMG this is the best one yet but seriously this one really is. From the story line to the style of writing Last Breath has certainly took my breath away, this book is phenomenal!

With one gritty prologue that leaves you wanting more once a again we are taken on a roller coaster ride. Last Breath tells a story of a young woman who is found brutally tortured. When I say brutally I mean brutally! My god the autopsy descriptions made me cringe totally turning my stomach

Detective Erika Foster is one of the first at the crime scene and it’s not her case. While she fights to secure her place on the investigation team, Erika can’t help but get involved and quickly finds a link to the unsolved murder of a woman four months earlier. Dumped in a similar location, both women have identical wounds – a fatal incision to their femoral artery.

One thing I loved about this story is the fact that we know who the killer is and it’s just a matter of time before the police find out who it is. Which makes a change from guessing who it is.

Last Breath is one epic, gripping, page turner must read which I highly recommend giving it 5 massive gold  stars.

🇺🇸 http://amzn.to/2l2v1Th
About the author

Robert Bryndza grew up on the east coast of England, but now lives in Slovakia with his Slovak husband. His debut romantic comedy The Not So Secret Emails of Coco Pinchard became an Amazon bestseller. He’s published further Coco Pinchard adventures and two more best selling stand-alone romantic comedies, but has always harboured a desire to write crime, and was a finalist in the BBC Writersroom Drama Academy.
Bookouture publish Robert’s crime fiction series featuring Detective Erika Foster and the first book in the series The Girl in the Ice has sold over 1 million copies.
www.robertbryndza.com
https://www.facebook.com/bryndzarobert