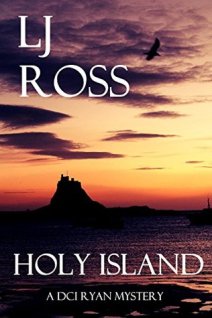 Detective Chief Inspector Ryan retreats to Holy Island seeking sanctuary when he is forced to take sabbatical leave from his duties as a homicide detective. A few days before Christmas, his peace is shattered and he is thrust back into the murky world of murder when a young woman is found dead amongst the ancient ruins of the nearby Priory.

When former local girl Dr Anna Taylor arrives back on the island as a police consultant, old memories swim to the surface making her confront her difficult past. She and Ryan struggle to work together to hunt a killer who hides in plain sight, while pagan ritual and small-town politics muddy the waters of their investigation.

Detective Chief Inspector Ryan believes he has put his turbulent history behind him. Then, in the early hours of the summer solstice, the skeleton of a young woman is found inside the Roman Wall at Sycamore Gap. She has lain undiscovered for ten years and it is Ryan’s job to piece together her past.

Enquiry lines cross and merge as Ryan is forced to face his own demons and enter into a deadly game of cat and mouse with a killer who seems unstoppable.

Murder and mystery are peppered with a sprinkling of romance and humour in this fast-paced crime whodunnit set amidst the spectacular scenery of Hadrian’s Wall country in Northumberland.

When a man is found dead at the remote church of Heavenfield, DCI Ryan is the only other person for miles around. The police have no weapon, no motive and no other suspects.

Already suspended from Northumbria CID, Ryan must fight to clear his name. But soon, more than his career is at stake when prominent members of the mysterious ‘Circle’ begin to die. Somebody wants Ryan’s name to be next on the coroner’s list and to survive he must unmask the devil who walks among them – before it is too late.

Unfortunately for Ryan, the devil looks just like everybody else…

Murder and mystery are peppered with romance and humour in this fast-paced crime whodunnit from LJ Ross, set amidst the spectacular Northumbrian landscape.


My thoughts
For those of you that have been wondering why I have been quiet on social media recently, Is because I have been devouring my way through this flawless series of books.Having read Holy Island and hearing that LJ Ross has a fourth book coming out, I felt it was time to play catch up having heard so many rave reviews. And OMG what a series this is, I have read them more or less back to back. And thought it would be easier to write one review for the first three books.

What can I say but this series is simply unputdownable. To say I liked it, is an understatement. I absolutely flipping loved it. DI Ryan is one cracking series to say the least and will have you hooked from start to finish.

Holy Island starts off with off with gruesome murder.Sycamore Gap starts off with a skeleton of human remains being found and Heavenfield starts off with a man found dead in a church.Exciting or what?!  Detective Chief inspector Ryan is on the case to solve each mystery. Although in Heavenfield Ryan ends up a suspect….. Oh and what a brilliant character he is. I am starting to get a character crush with him that’s how likeable and believable he is. His character grows stronger throughout each book, has we get  know him more.

The series is set in Northumberland and after reading it I would love to visit there one day. I felt like I was actually there in the story. There are plenty of twists and turns in this series keeping you guessing until the end. I love the author’s style of writing with descriptions that are very atmospheric and I found them an easy read.

LJ Ross certainly knows how to write a good story, what can I say but this series is spot on which I highly recommend and you won’t be disappointed from stunning book covers to captivating plots. These can be read as a standalone but it is to good a series not to be missed.

It’s a massive well deserved 5 stars from me, I cannot wait to read more by this author