I am over the moon to be kicking off See How They Run Blog Tour on publication day. Not only have I got a Q&A with Tom, you all also find my review at the bottom….. So keep on reading guys.

Can you tell us a little about yourself and background?
I’m a full-time writer, living by the sea in Brighton. I write stories, read stories, surf the internet and watch TV. I cycle and swim a fair bit, to try and offset a love of chocolate and beer, and I spend time with my family. Before I was a writer I did a succession of fairly boring jobs, and I also had a few years as a househusband, in an era when being a househusband was not really a typical thing to do – “Yeah, but when are you going to get a job?” one of my friends would relentlessly ask. I’m afraid that I have no particular claims to fame or exciting incidents to report, probably because every spare moment is spent either reading or writing.

When did you know that you wanted to become a writer? and how did you go about it?
The quick answers: seven; and badly! The ambition began right from when I could read – I was drawing and writing comic strips from a young age. I started submitting short stories from the age of fifteen and collected hundreds of rejections, before things gradually began to go my way in my thirties. Describing the process now would make it seem quaint and absurd, since there was no internet, no computers, no home printers. I remember one novel that I submitted only once because the typescript was returned in such a messy state that I couldn’t send it out again, and I didn’t have the money (or wherewithal, let’s be honest) to consider having it photocopied, so I just put it aside and wrote another book. That might be one of the reasons it took me so long to get anywhere!

Can you tell us what genre your books are and the audience you write for?
Crime and thriller. I tend to write about ordinary people who are suddenly thrown into dangerous situations, similar to authors such as Harlan Coben, Linwood Barclay or Simon Kernick.

What is your writing process? and how long does it take?
Once I get an idea I tend to mull it over for a while – weeks or sometimes months, while the story forms in my head. I’ll write some notes but I don’t plot out the book in great detail. When I’m underway I try to get the first draft finished as quickly as possible, usually within four or five months, but it can take a few more months before it’s in good enough shape to send to my agent and editor. Usually there are several more rounds of editing before the book is finished, by which time the original word count of, say, 140,000 might have been cut to around 100,000 words.

Are your characters based on anyone you know or are they just fictional?
All strictly fictional, I promise! But there are probably bits and pieces of people I know in there, and I daresay they all have some elements of me in them as well.

Have you wrote about a personal experience in your novels?
SEE HOW THE RUN was inspired by an attempted break-in one night. I’d only just gone to bed when I heard noises outside; I opened the window and scared off an intruder who had been trying to get in through our patio doors. What stuck with me afterwards was that this took place at just after midnight, which seemed quite early to risk breaking into a house where people are asleep. With my son then sleeping in a bedroom downstairs, I couldn’t help wondering what might have happened if the intruder had got inside.

From that came a story about a young couple, Harry and Alice, who wake to find two masked men in their bedroom, threatening their young baby and demanding to know the whereabouts of a man called Renshaw, and a mysterious parcel that was delivered to their address. They deny knowing anything about it, but later Alice realises that she may know a little more than she was letting on…

What research do you do?
Before starting I’ll generally try to put together a document that lists what I need to know about, and then it’s a case of looking online, talking to family and friends, etc. It’s amazing how often someone will know just the expert you need. For locations, I try to visit them at least once, because although you can get a huge amount using Google maps and other online resources, nothing quite beats the experience of walking around and soaking up the atmosphere of a place. Once the book is underway, all the tiny details you need – the cars, gadgets, clothes and so on – are there at the touch of a button, thanks to the internet.

Who would you like to co-write with and why?
I love the idea of co-writing, if only because it would be so nice to share all the time-wasting and distractions with someone. Rather than collaborate on a novel, I think I’d want to do a film or TV script – I’m a big fan of Steve Coogan, so I’d love to have a go at writing a movie with him.

That’s an impossible question to answer – there are so many books that mean a lot to me for all kinds of reasons. When I was 16 I was absolutely stunned by a book called The White Hotel, by DM Thomas, and if I had to name a single favourite author, I would go for Graham Greene. He was an absolute master at practically every type of story you could think of.

What’s your favorite food?
Chocolate, for sure. The most essential of all the food groups.

What’s your favorite film?
The Dark Knight. I was blown away by how complicated it is compared to most superhero movies – there are four of five storylines, brilliantly interwoven, and Heath Ledger’s performance is astonishing. I wasn’t crazy about some of the other casting, to be honest – I think someone like Carla Gugino would have lit up the screen as Rachel, for instance – but it’s definitely the most exciting and satisfying of all the “blockbuster” movies I’ve seen over the years.

What’s your favorite song?
I could put forward dozens of songs here, and a lot of them would be by Bruce Springsteen, so I’ll go for Drive All Night. (Actually, it’s that or Meat Loaf – For Crying Out Loud.)

How can readers find out more information about yourself and your books?
I have a website, www.tombale.net (which I probably don’t update as often as I should) and I can also be found on Facebook – https://www.facebook.com/tombalewriter – and Twitter https://twitter.com/t0mbale 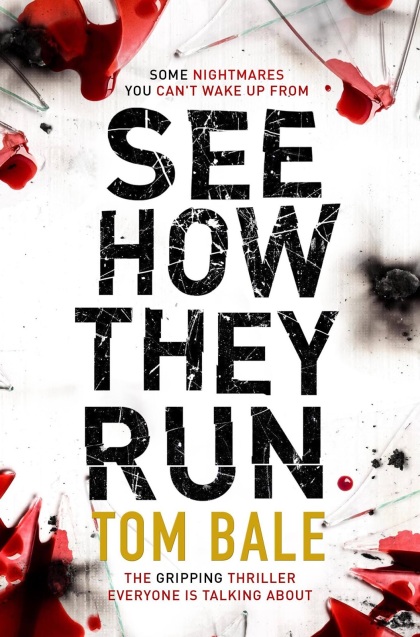 The Book
How far would you go to save your family?
In the dead of night, new parents Alice and Harry French are plunged into their worst nightmare when they wake to find masked men in their bedroom. Men ruthless enough to threaten their baby daughter, Evie. This is no burglary gone wrong. The intruders know who they’re looking for – a man called Edward Renshaw. And they are prepared to kill to get to him. When the men leave empty handed, little do Alice and Harry realise that their nightmare is just beginning. Is it a case of mistaken identity? Who is Renshaw? And what is he hiding? One thing is clear – they already know too much. As Alice and Harry are separated in the run for their lives, there is no time for breathe in their fight to be reunited. And with their attackers closing in, there is only a choice: STAY ALIVE. OR DON’T. Terrifying, unputdownable and full of twists and turns, this debut thriller will have you on the edge of your seat right to the very last page.
My Thoughts
I loved See How They Run that much I don’t know where to start. Seriously this story is that good you will not believe it until you read it yourself!
I couldn’t wait to get my hands on a copy and I sure as hell wasn’t disappointed. This book has got it all an amazing cover which is so simple but eye catching and one fantastic story. I was blown away!!
So the story starts off with one hell of a start, Imagine waking up to find two masked men in your room. That would be my worst nightmare. But that’s exactly what happens to Alice and Harry French parents of eight week old baby Daughter Evie.The Masked men are actually looking for a man called Edward Renshaw. And are prepared to kill to get to him. Although the men leave empty handed Alice and Harry’s nightmare is just beginning. But who is Renshaw? And what is he hiding? We then follow Alice and Harry on one rollercoaster journey when they are separated in the run for their lives, in their fight to be reunited
This opening scene is so uncomfortable it made me squirm. But the authors very clever and sensitive handwriting skills left me wanting more,I was truly hooked. See How They Run is a totally intense read, which I couldn’t put down. I actually thought I was going to have a heart attack it got my heart racing that much! I was on the edge of of my seat throughout this story, it is absolutely gripping and full of suspense which I love in a book. And this would make of epic film! This is one of those books that will stay with me forever.
Tom Bale is definitely one author that I will be keeping my eye out for. And I can’t recommend this book enough. It is a must read for all Crime readers having all the elements a crime book should have. See How They Run is one of my top reads this year for 2016. Which I am giving a massive well deserved 5 stars to.
I would also like to say a big thank you to Keshini Naidoo and Kim Nash from Bookouture for an early advanced reader’s copy.
About Tom Bale:
Tom Bale decided that he wanted to be an author from the age of seven but, after another career got in the way, it wasn’t until much later that his dream was fulfilled.  After several books with Random House, Tom signed with Bookouture for two stunning ‘everyman’ thrillers.
www.tombale.net
www.twitter.com/t0mbale
www.facebook.com/tombalewriter